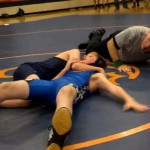 a remarkable sense of sportsmanship when he takes on 13-year-old Jared Stevens who has Cerebral Palsy and lets him win the match.

The way this came about is that Jared’s wrestling coach, Clay Mayes, who said that the 13-year-old Jared practices with his school’s wrestling team every day despite his Cerebral Palsy, expressed a desire to take part in an actual wrestling match. Coach Mayer contacted the wrestling coach at Justin’s school and asked him to “point me toward the kid who has the kindest heart.” That turned out to be Justin.

Both boys got a surprise when they were invited to ABC’s Good Morning America and got to met Olympic wrestler Rulon Gardner!